Does it matter if Facebook is too ad-ridden and filled with spam? Are the only people you are reaching just other marketers, scouring the site for content? There are still 1.23 billion people on Facebook but where is the next step? We are reaching critical mass with social media. It’s growth and popularity can surely only last so long, can it? 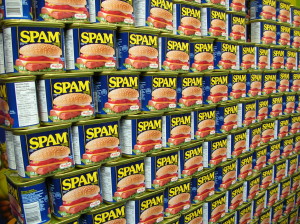 Might some businesses abandon some social media just for the exclusive cultural cache that it may provide, ‘Company A - oh, they’re not on Facebook’. If you jumped ship, would you land in the icy, Arctic waters, or in the lifeboat, rowing to safety?

There is a new social media network, called Ello. It is currently attracting 35000 new sign ups an hour. The emphasis of the site is the users and content. Its main attraction is that it is free from adverts and has a sparse, minimalist design. Does this exodus mean that people still require social media but want an alternative to the stream of adverts? More choice could mean that we start to resent the companies that continue to push adverts and marketing on social media. Are adverts on Facebook becoming so ineffectual and disliked that they will become obsolete?
Currently, Facebook and social media are too big to ignore but that doesn’t mean it will be here forever. We watched Myspace crash into oblivion and AskJeeves follow suit. They first rose like Pacific islands, steaming from the depths. Then sank under their own weight, leaving us with only an online atoll as a reminder of their existence. However, neither was as big as the social media giants of Facebook and Twitter. Neither had the reach or the power of the big two sites we have today. Each is now big enough to weather the storm of public opinion and maintain an active presence despite fluctuations in popularity.

But stories of insidious data retention and calculated, targeted marketing have alienated users. Generally, where marketing becomes ubiquitous, people leave. Facebook could become a ghost-directory of abandoned profiles. A virtual mausoleum to how adverts suffocated content. As George Orwell said, ‘Advertising is the rattling of a stick inside a swill bucket’. Has the social media bucket run dry?

We would say the answer is NO. What we are seeing is not a death but a shift. There is a shift from Facebook being a bastion of youth culture to it being adopted by more and more older people. Whilst this is certainly tarnishing the initial element of ‘cool’ it once had, it is not necessarily bad news. Older people will have more disposable income and are far more likely to be able to commit to renting a property after connecting with one of your posts.

The key takeaway of this is that Facebook and social media are always changing. It will most likely be around for a long time yet but that is no reason not to consider other options when you see them. If you are trying to appeal to an exclusive youth market then perhaps there are better places than Facebook to market your properties. But, if you are aiming at the mass market then Facebook and Twitter are still important marketing options. It is as simple as just not being able to ignore the sheer numbers. With more than a billion active users, it really is a worldwide force. If you are unsure how to utilise social media for your business, have a look at how our social media package can manage this for you.

Faced with the challenge of promoting properties online, most vacation managers read more

Vacation Rental Marketing With Instagram: How to Create Your Visual Voice